Advertisement my-app.net is an online database that enables teams to easily design web based applications to gather, share and manage business information.

Find developer tools that work with GitHub. Please download/clone the entire project as there are. Remove-Module ReportingServicesTools Import-Module. Migrating SSRS content. Describes the tool with a now defunct link to its original download. It does cover some of the shortfalls of the RSScripter tool.

When I used this tool to migrate to the new server 136 items were migrated and it took just a few minutes. When I inspected the new reporting server and compared it to the old all items I ask for were on the new server, intact and functioned the same as on the old server.

I have read the and understand I may unsubscribe at any time. Wednesday, June 22, 2016 - 2:44:35 AM - luoki Hi Dale, thanks for it, i had download the RSSscripter (the same versio with your), but i got error when try to scripting, any idea for it?

Monday, April 16, 2012 - 1:06:12 PM - MWise I moved/upgraded our 2005 report server db just like LSN. Deattached/Attached and then let Reporting Services upgrade the database. I think I may have had to export/import the encryption keys, but it was pretty easy as I remember. Monday, April 16, 2012 - 12:34:33 PM - LSN I do like RS Scripter very much, but in the scenario you describe, why wouldn't you just attach your ReportServer db to the new SSRS 2008 instance? It would have upgraded your db for you and all your reports and other objects would have been just there without additional work.

Note: the user will be listed as the “creator” of shared schedules and “modified by” account for report items, in the target server. -v tst='SITE' OPTIONAL.

Optionally, you can create folders or subfolder for each user. Log in as one of the users with “My Reports” content. In Report Manager, click the My Reports folder. Click the Details view for the folder.

Download Advertisement my-app.net is an online database that enables teams to easily design web based applications to gather, share and manage business information. ( ) SQL Scripter is written in VB.NET 2005, so it requires an installed.NET Framework (Version 2.0 or higher) on your client PC.

You can't send emails. You can read topics. You can't vote in polls.

Once all options have been set you are ready to run the tool. First select a server from your server list by clicking the drop down labeled Report Server. Once a server is selected click the Get Catalog button.

It would be nice if there were other mechanisms to get you the answers we need more timely, but this tool is used as is with little instruction. Best hope is for people that have used this be nice enough to provide input. I've used this tool to migrate reports 2005 to 2012. It was a little frustrating at first because my subscriptions were not transferring. In reviewing the log file generated by this process I really paid attention to the errors. Although you'll not see 'your subscriptions didn't generate because', resolving those errors is key. You may still receive errors that the parameter is not supplied and for any.rdl error your subscription for that report more than likely won't generate.

This tool uses PowerShell for migration scripts. Here is the link to l. For more information about how to use this tool, see.

If the owner does not have CreateAlerts/ManagedAlerts permission, the operation will fail. • Report parts are not linked correctly to the Report. (We are working towards a solution.) o Database connection to target server catalog is made using Windows Integrated credentials of the user running the tool. For a walkthrough of RSMigrationTool (command-line) and RSMigrationUE (GUI tool), list of content types migrated, and information about supported migration scenarios, see the following article.

Change the output directory path ( Should not be machine/user specific e.g. Desktop) e.g. C: AClickReports and click on Script. The script for loading the specified items will be generated to the specified folder.

Good luck Unfortunately, the RSScripter tool is seriously outdated. It only supports SSRS until 2008. 2008R2 and 2012 are not supported and that's most likely why you run in so many errors. I have looked into alternatives and used for one project. A colleague of mine used VBscripts together with the SSRS web service to deploy everything. (you can find a link to his findings in the same blog post) My blog. MCSE Business Intelligence - Microsoft Data Platform MVP.

Troubleshooting Use the trace flag –t to receive more information. For example, if you run the script and see a message similar to the following • Could not connect to server: Run the script again with the –t flag, to see a message similar to this one: • System.Exception: Could not connect to server: ---> System.Net.WebException: The request failed with HTTP status 401: Unauthorized.

When you run the RSScripter tool this will extract the appropriate folder and/or reports that you select. For this Blog I am taking the folders and reports. Your script extract location will generate the same folder structure as you see in Report Manager as well as 3 types of files in each of the sub folders: •.

(We are working towards a solution.) • Linked reports are not support in SharePoint mode, hence not backed up. • Database connection to source server catalog is made using Windows Integrated credentials of the user running the tool. • Target server • Target server must be SharePoint integrated mode. (We are working on support for native mode.) • The web application must be using Windows classic authentication mode.

Works like a charm on 2012. Thursday, April 23, 2015 - 4:26:00 PM - Frank Garcia Kamlesh, How were you able to migrate to 2012? I'm getting an error in the logs. Running script 'Every Week Day.schedule.rss' Could not connect to server: I modified the cmd file to point to the new reporting server. Wednesday, June 25, 2014 - 11:25:49 AM - Craig Guyer The following topic working code sample. may be useful Sample Reporting Services rs.exe Script to Migrate Content between Report Servers Wednesday, May 28, 2014 - 6:36:07 AM - Lebo I’m having an error rsInvalidItemPath (The path of the item ' is not valid. The full path must be less than 260 characters long; other restrictions apply. If the report server is in native mode, the path must start with slash.) and cannot figure out which variable has an issue and how to fix it.

After running the batch file, I see the datasource along with the data files but while running the report, it gives a message 'Cannot connect to datasource. Login failed for sa'. Deleting the existing shared datasource and adding it again and remapping it to reports, makes it work again. Any ideas on how to get rid of the problem. The name of the datasource matches the data source embeded in the rdl file, not sure why its happening. Any ideas will be appreciated. I am trying RS Scripter for the first time.

The first column is just a label and can be anything you like, but it must be unique. The second column is the actual link to the reporting server and should be of the form for SQL 2000 servers and for SQL 2005 and 2008. I am not going to go through each tab; the tool includes a very good readme that describes all the available options.

Update: The download link and the sqldbatips site seems to be down for quite sometime now and I am not sure if it’s going to revive ever or not. I came across a project on CodePlex which talks about installing and configuring Reporting Services Scripter (RS Scripter) as part of the SQL Server install process, not sure how well it’s going to work but here is the link to the project - In case you are not able to find the executable for RSScripter look at (if it’s still there ) If you are using SSRS then chances are high to come across a scenario where you want to deploy reports developed on development machine to the production server, there are various ways to do this and one of them is to use tool. Here are the steps to do this - 1. Creating Report Deployment Script • Download the Reporting Services Scripter - • Update the servers.xml; change the reportservice value if your ReportServer name is different. • Run the RSScripter.exe. • Click on Options, and select the options selected in images below( for more information about Scripting Options check the readme file - ) – • Change the SQL 2005 RS EXE Location in the Global tab as per the location of SQL server and Apply – • Select SQL 2005 from the Report Server dropdown and click on Get Catalog, all the reports, data source, Schedules, Roles etc. Present in report server will be displayed – • Select all the reports, data source, schedules and roles you want to transfer. 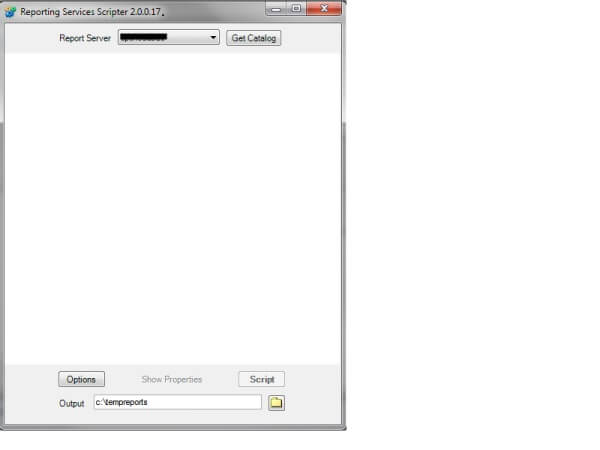 Select each report that you want to copy. Click Move in the Report Manager toolbar. Select the desired destination folder. Repeat steps 2-7 for each user. Run the script.